Taking Back the City: An Interview With the Founders of About U

No one stumbles upon greatness. It takes a team of driven individuals, mentors, and resources to create something extraordinary, and that is just what George Lanese and Alex Coombs aim to bring to the boroughs of New York City. These two men are the founders of About U, a community-service driven organization that inspires inner-city youth to own their future. They know that New York is full of some of the nation’s top football talent in the country, but barriers like academic ineligibility, training resources, and guidance have kept these kids under the recruiting radar.  About U is flipping the script on the stigma of city athletes, helping young men and women reach their maximum potential, and putting NYC on the map as a football powerhouse. 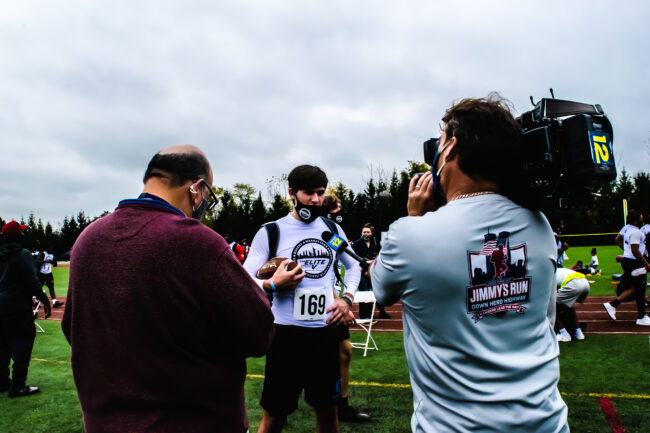 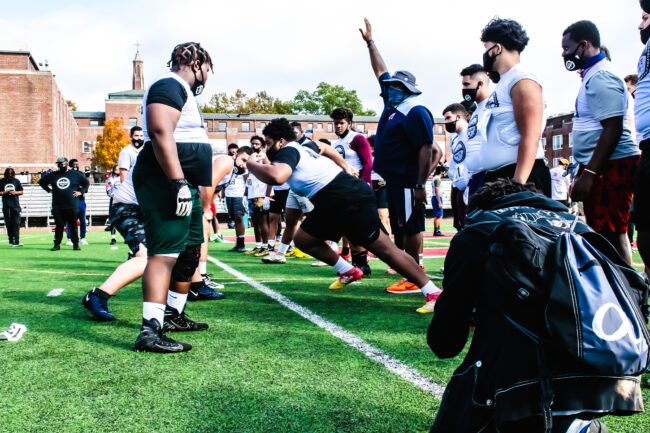 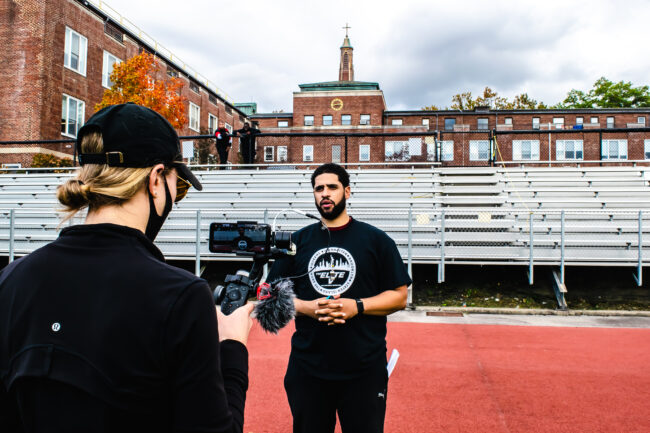 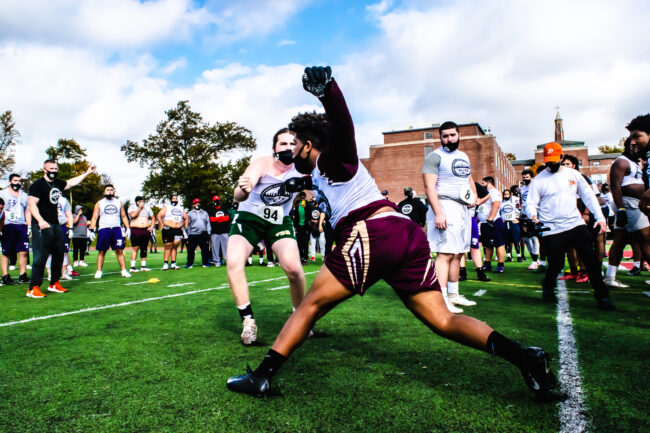 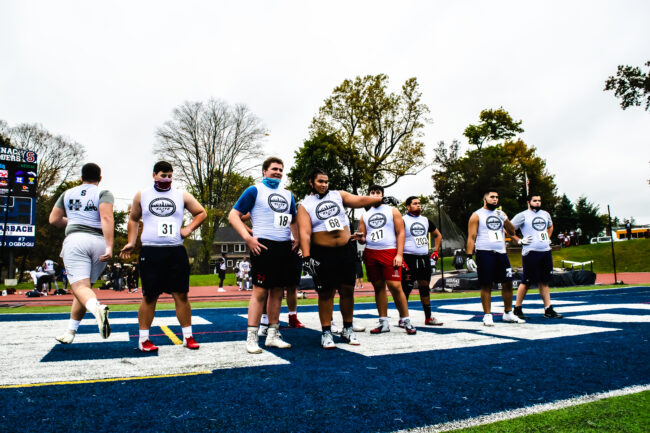 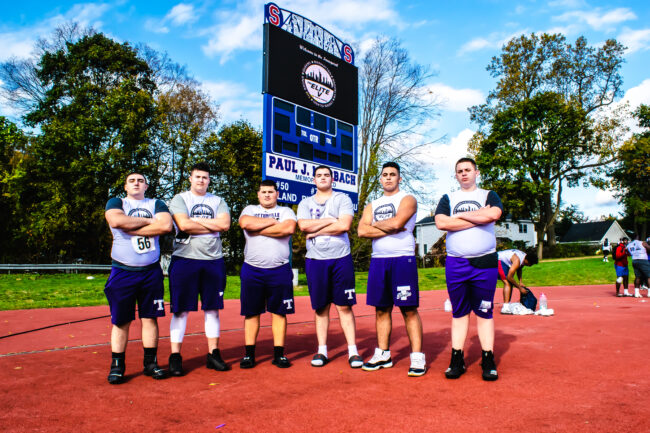 Founded in 2017, About U is quickly emerging as a premier program for the way that it partners athletic performance with academic preparation. It might seem like a basic concept, but the organization’s success is attracting attention from other east coast cities who want to recreate it in their own communities. In only three years, About U has helped athletes commit to top-notch collegiate football programs such as Stanford, Purdue, UPenn, and UMiami. In the Class of 2021 alone, About U has worked with fifteen student-athletes who have received Ivy League offers. George describes that “what’s always going to set us apart is how much we care. We go above and beyond, and the goal has never just been about academics or colleges. It’s always been about jobs.”

Before launching this non-profit group, George worked in finance on Wall Street. An old friend reached out and offered him a coaching position at Cardinal Hayes, and he quickly discovered that kids were being misinformed. “There were not enough adults around telling kids that academics were the way. What I saw was that kids wanted it, but they just needed more support.” George noticed that kids living in the city did not have access to the same resources and opportunities as other student-athletes living in the suburbs. They can’t go outside and play because it’s not safe. Even simple tasks like getting to school and practice on time take tremendous effort, so these kids are essentially grinding 24/7 just to catch up. George says, “If they have to go through all that and still get there and do the amazing things they do, then more power to them. They are the true heroes, not us.”

George connected with Alex Coombs, a hustling and experienced trainer and coach, and together they began making an impact as a solution-based organization.

It just made sense to form About U and try to use sports and not let sports use kids. Historically, that’s been the issue here with with the city athlete, and in particular, black and brown kids. I want to see them have a brighter future, and if sports can help that in my area – Harlem and the South Bronx – we’re going to do that.

Alex’s passion is personal because he understands what the athletes are experiencing. He never had a mentor to guide him through the recruiting process, still, he made the football squad at West Virginia as a walk-on. He realized that talent was not the barrier for athletes in New York, but rather it was a lack of direction and inadequate instruction on how to self-advocate. His goal as a coach is to help promote his athletes to help them unlock opportunities he knows they are capable of.

Patrick Godfrey is the final piece of the trifecta, and George and Alex tell us that he brings electric energy. Much like Alex, he was a gifted athlete with big dreams, but lacking the knowledge of how to get noticed on the scouting scene.  He says,

Growing up my entire life, I heard the same rhetoric over and over again: that football is not an option at a high level coming from New York. It was really frustrating to me because I was such a big football fan and my dream was to play big time college football. There wasn’t really a roadmap for how to do it because I had never really seen anyone do it before.

Less than a decade later, Pat has become that roadmap. He declined some small D1 offers to play football, choosing instead to attend Clemson on an academic scholarship. He was one of only four kids to make the team out of one hundred who tried out, and in his three years at the school, he graduated with two national championship rings. Getting involved with Alex and George and About U has given Pat the platform to empower kids who are facing the same hardships he faced himself not long ago.

It was really easy for me to see when I got involved  that what these kids need more than anything is somebody who believes in them and verbalizes that. I’ll say things to them like “Hey, man, I played at Clemson, and you’re athletic,” or “Hey, you’re picking this up fast! You’re doing great and I think you have great potential,” and all that kind of stuff. It really is something that more kids out there need to hear. A lot of kids in New York toss headphones on and suffer in silence. What we need to do now more than ever is be that voice telling them “hey, you can do great things.” If you tell kids that enough, they’ll start to believe it, and then there’s not telling what’s possible.

Plenty of organizations aim to support underprivileged youth, but About U is special. They keep kids at the center of their work, adjusting to their needs and strengths. For most of these athletes, sports specific training is the fun part, but George has a reputation as the “SAT Guy.” Performance isn’t the root of the problem of advancing to the next stage, it’s ineligibility, so George has taken on his very own “test prep boot camp” where he teaches the fundamentals just like he would on the field, and he starts with the kids as early as 9th grade. If that means meeting 1:1 with a kid at a Barnes & Noble on a Saturday, then that’s what About U has done before and will continue to do. Participants of About U score about 200 points more on the SAT than the average NYC student. Solutions that work in suburb communities won’t work here. The people, the setting, the situation is too different, so About U is constantly unearthing pain points in the system and coming up with creative ways to address them. 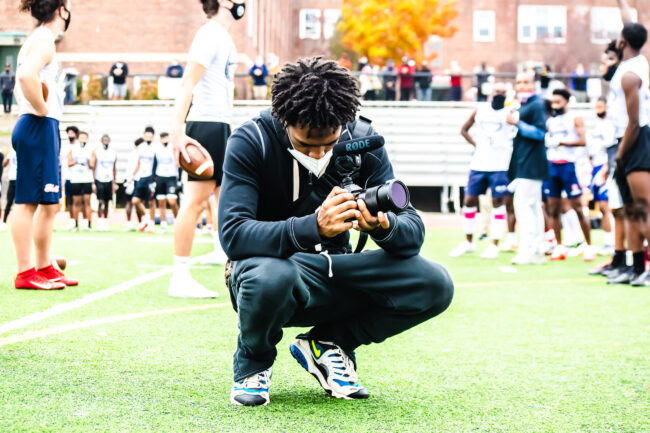 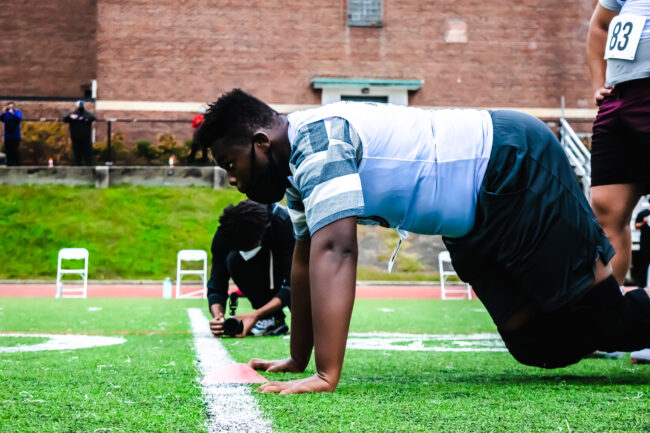 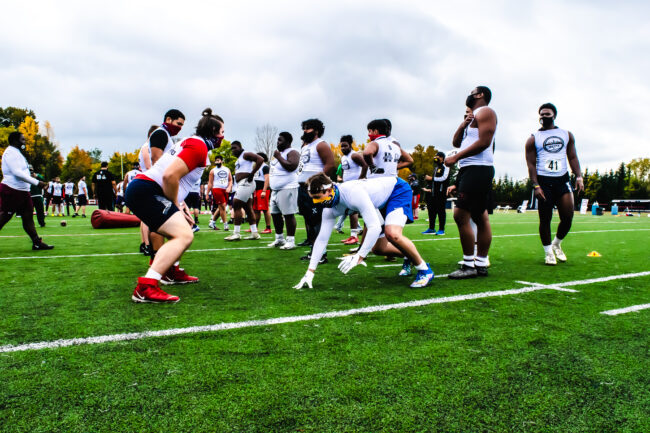 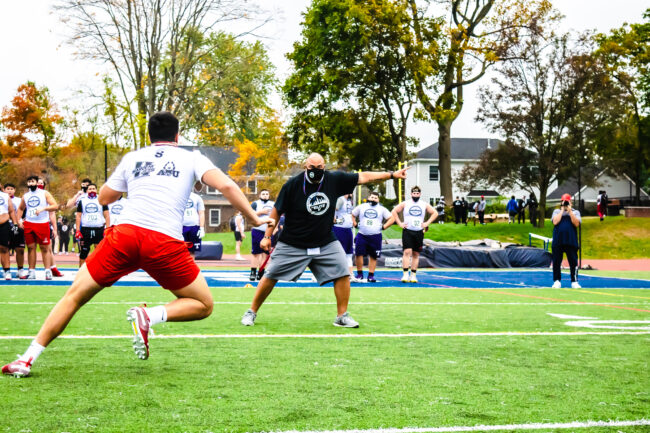 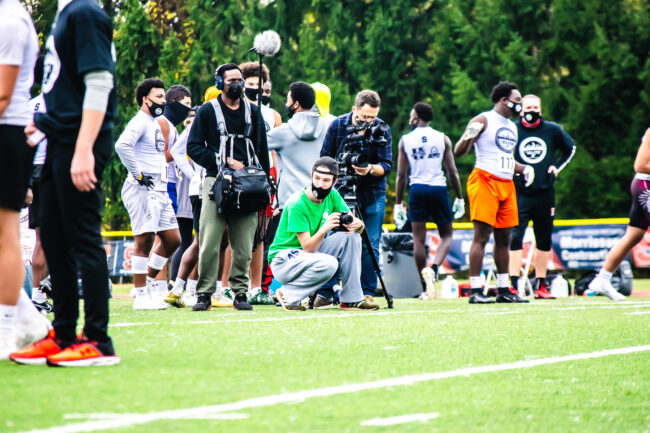 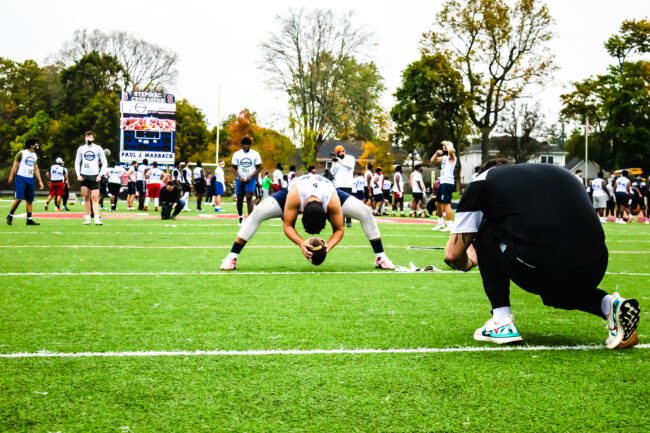 Most recently, About U played a huge role in the Elite V Showcase that took place on October 24th, which gave athletes a chance to perform virtually for an impressive list of college coaches. Covid-19 prevented athletic competition, so without a football season, high school athletes needed a new way to get noticed. As the saying goes, “Necessity is the mother of invention.” George pitched his idea to his team members, and after a few phone calls, they recruited the help of Joe Venice from Archbishop Stepinac High School and Jamal from the Harlem Jets (another youth sports organization). They created an event comparable to the NFL combine, which was not only a fun experience for the kids, but was also incredibly valuable for their future. They are already looking to host another one on May 22nd – stay tuned.

About U recognizes that bridging the gap in opportunities takes an army, and Rivals Creative is excited to be a partner on the front lines. It’s truly all about the kids and getting them the opportunities they deserve. Alex says,

Our kids are different because they’re willing to just completely outwork everyone regardless of the circumstances. Whatever the situation is, our kids are not going to use their hardships as a crutch.

If we are all defined by our ability to overcome challenges, then these kids are certainly getting it done. About U and their athletes bring a whole new definition to what it means to #LevelUp.